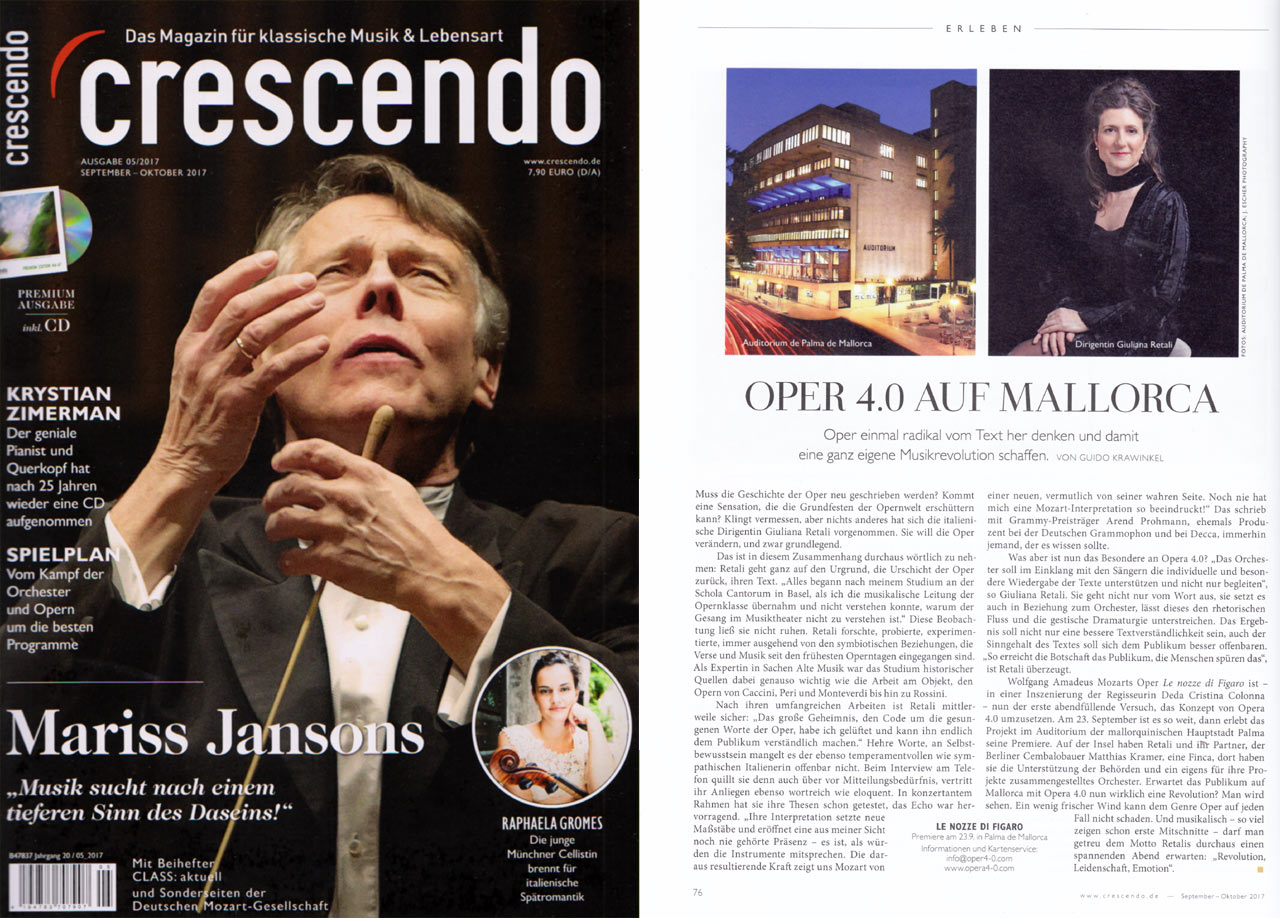 Should opera history be written anew? Has a sensation arrived that is capable of shaking the cornerstones of the opera world? It sounds presumptious, but this is quite simply what the Italian conductor Giuliana Retali has set her sights on. She is dedicated to changing opera and, moreover, in a fundamental way. In this context we can take the word ‘fundamental’ quite literally. Retali is going back to the source, back to the original fundaments of opera: its text...

"Right on the port of Palma, the Italian conductor Giuliana Retali conducted a performance of the opera which many great and established German opera houses could learn from, indeed, learn a lot from."
– CRESCENDO - Guido Krawinkel

"When opera is created with such passion, brilliance and coherence… … it is simply sensational….more performances are absolutely called for!"
– CRESCENDO 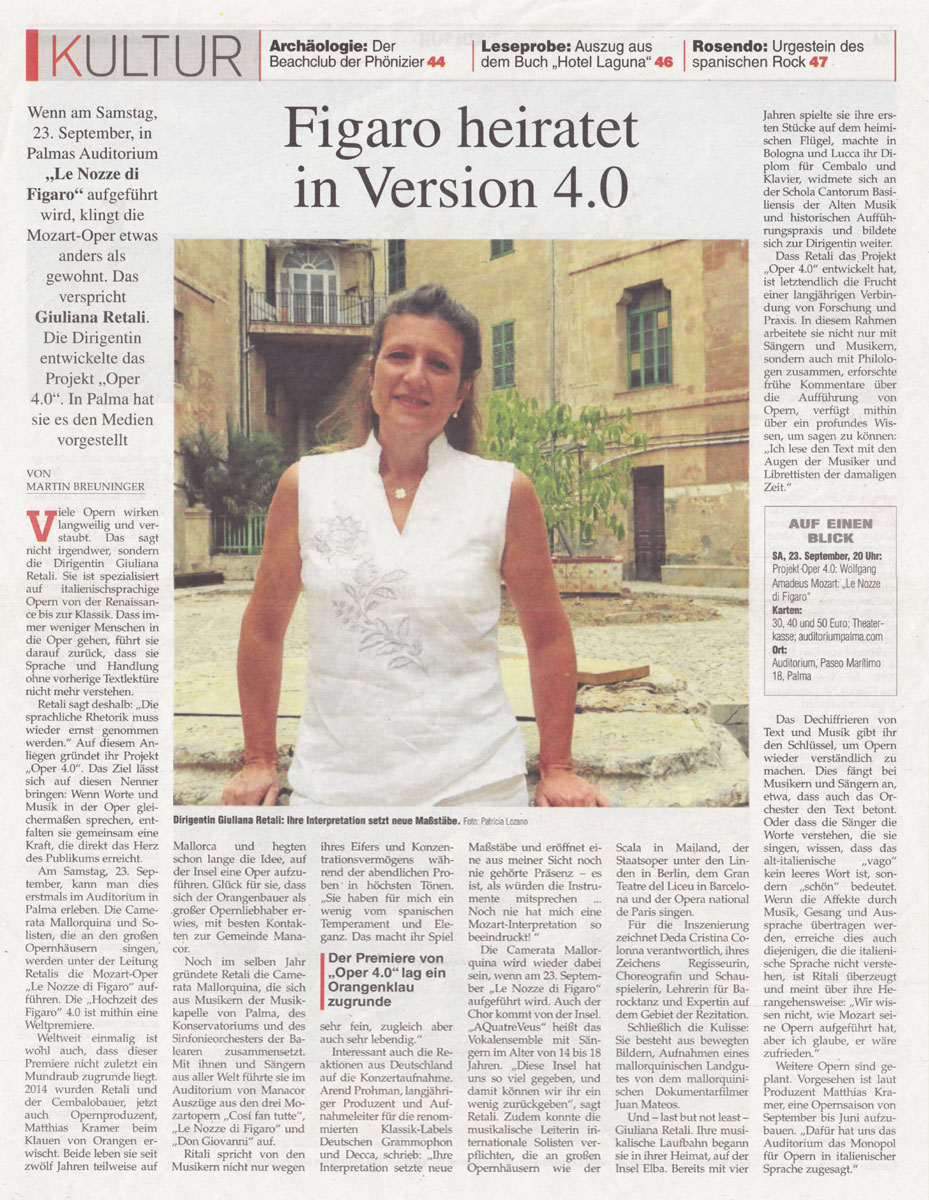 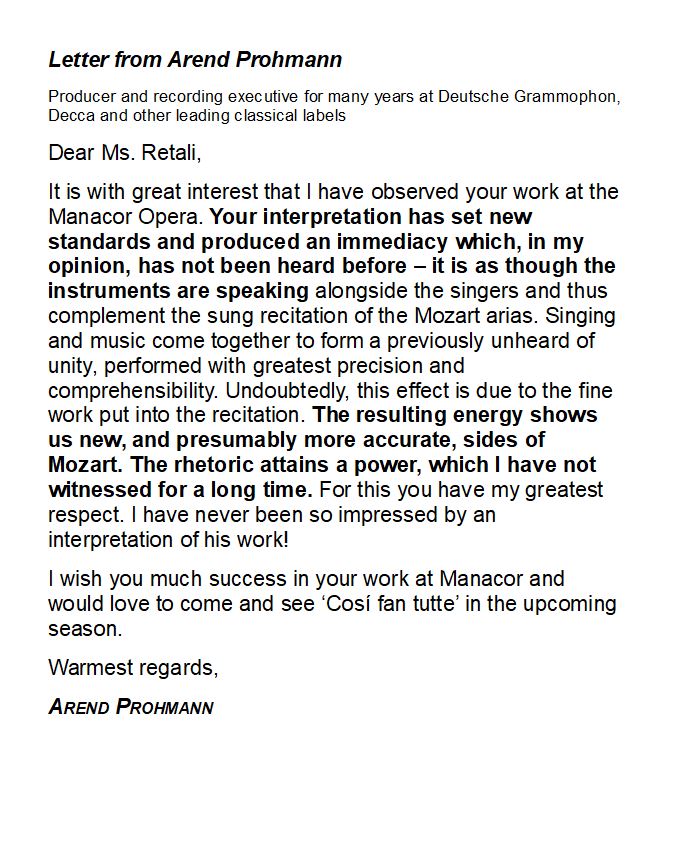 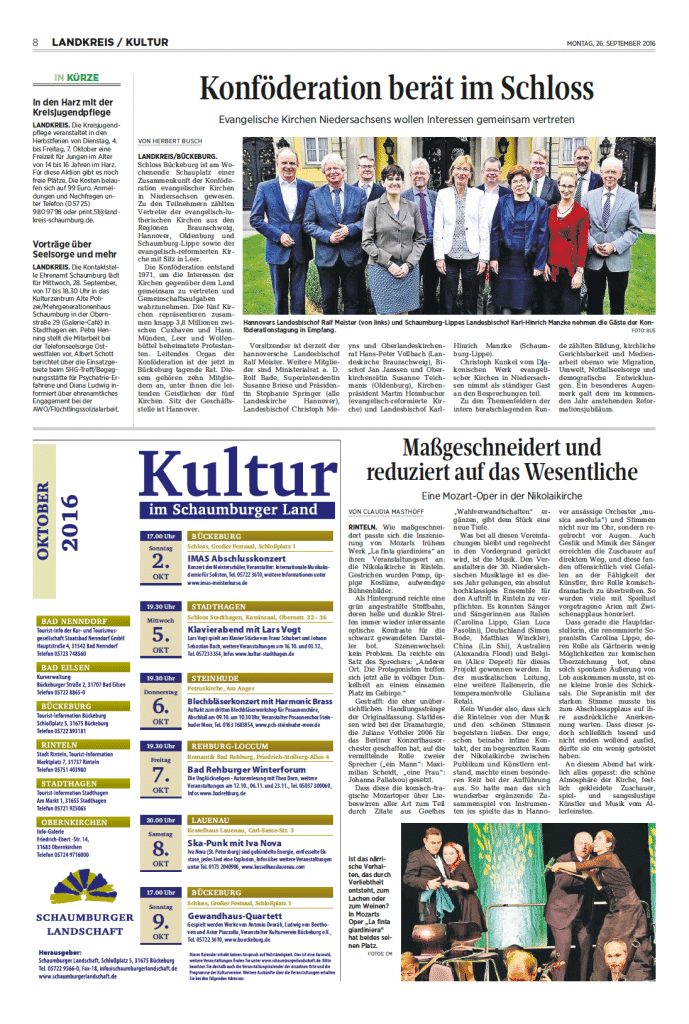 Nozze di Figaro 23.09.2017 - Palma de Mallorca
„And yet the island has just been the scene of a memorable production of Wolfgang Amadeus Mozart's opera ‘Le Nozze di Figaro’. This may seem like no record-breaking feat since the composer and his works remain part of the standard repertoire of all opera houses. However what made this performance so special was the fact that it was anything but standard.“
– CRESCENDO

Mozart, La finta giardiniera
Niedersächsische Musiktage – Rinteln, 24th September 2016
“The conductor was also Italian, the exuberant Giuliana Retali. No wonder then that the locals from Rinteln were swept off their feet by the music and the beautiful voices (...). It was an evening where everything fitted perfectly: the beautiful atmosphere of the church (...) the joyful singing and music-making from all the artists and music itself of the finest quality."
– Claudia Masthoff, “Schaumburger Nachrichten” 26th September 2016

Niedersächsische Musiktage
- Schloss Ippenburg, 25th September 2016
„MOZART IN A FRESH, CRISP AND CLEAR STYLE. Despite its name, the Hanoverian orchestra Musica assoluta in fact plays the role of the opera orchestra. Under the direction of Giuliana Retali, this youthful ensemble plays in an alert and lively fashion, giving Mozart's score a fresh, crisp and clear quality (...). In addition the absurd finale of the second act gains significantly from the virtuoso impetus that the orchestra contributes."
– Jan Kampmeier, „NOZ“, 27th September 2016

"It is fascinating how Giuliana Retali succeeds in emotionally spurring on the orchestra. Her conducting technique is outstanding and she is more of a motivator than an old-school, authoritarian orchestral trainer.”
– Letter from an opera director, 2014

"Her interpretation has set new standards and brought about an immediacy I've never heard before - it's as if the instruments are speaking too [...]. The resulting energy shows us new, and presumably more accurate, sides of Mozart. I’ve never been so impressed by an interpretation of his work!"
– Arend Prohmann (Deutsche Grammophon, Decca-producer) 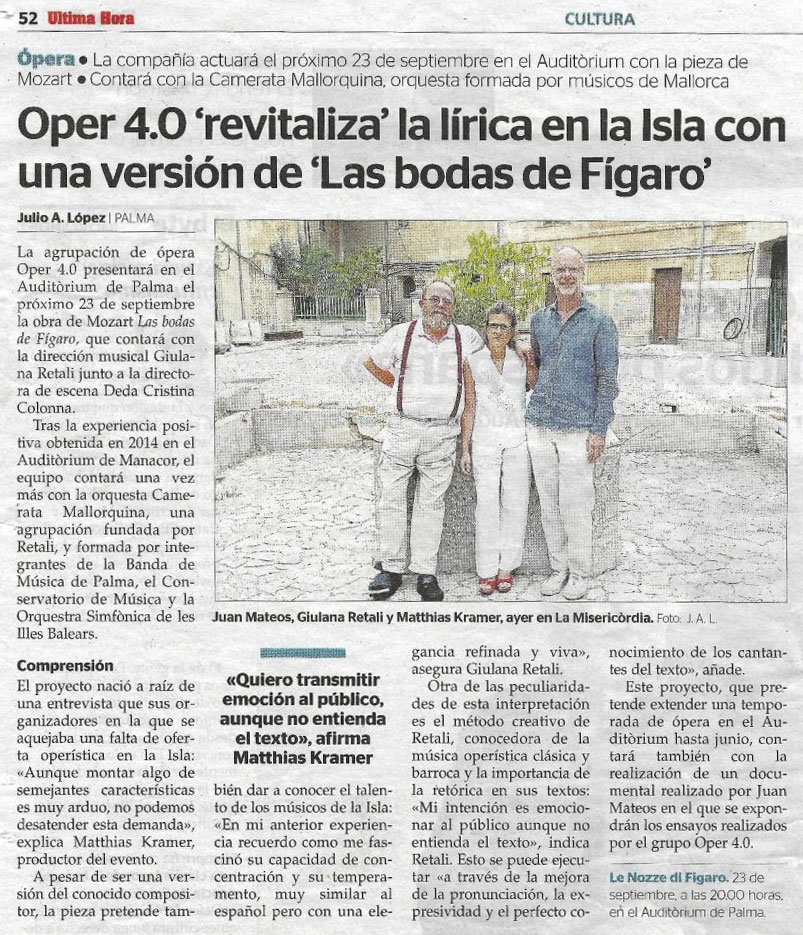 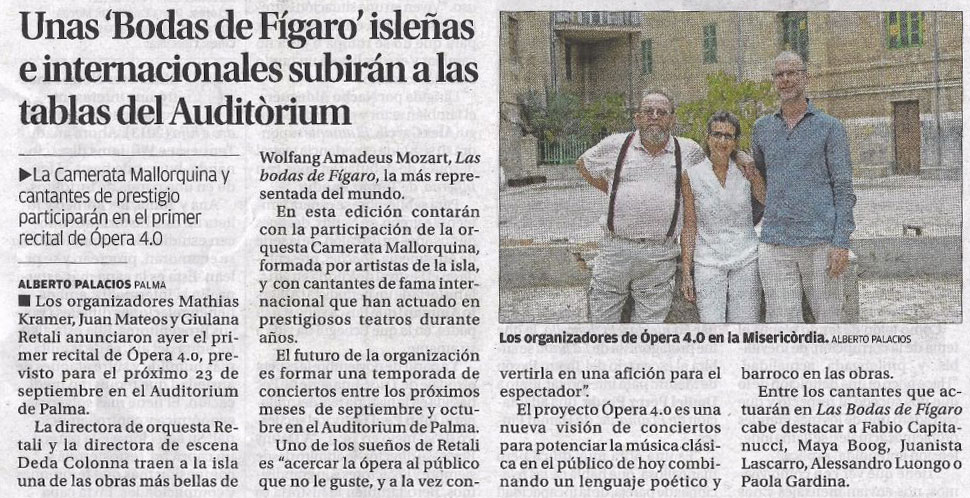 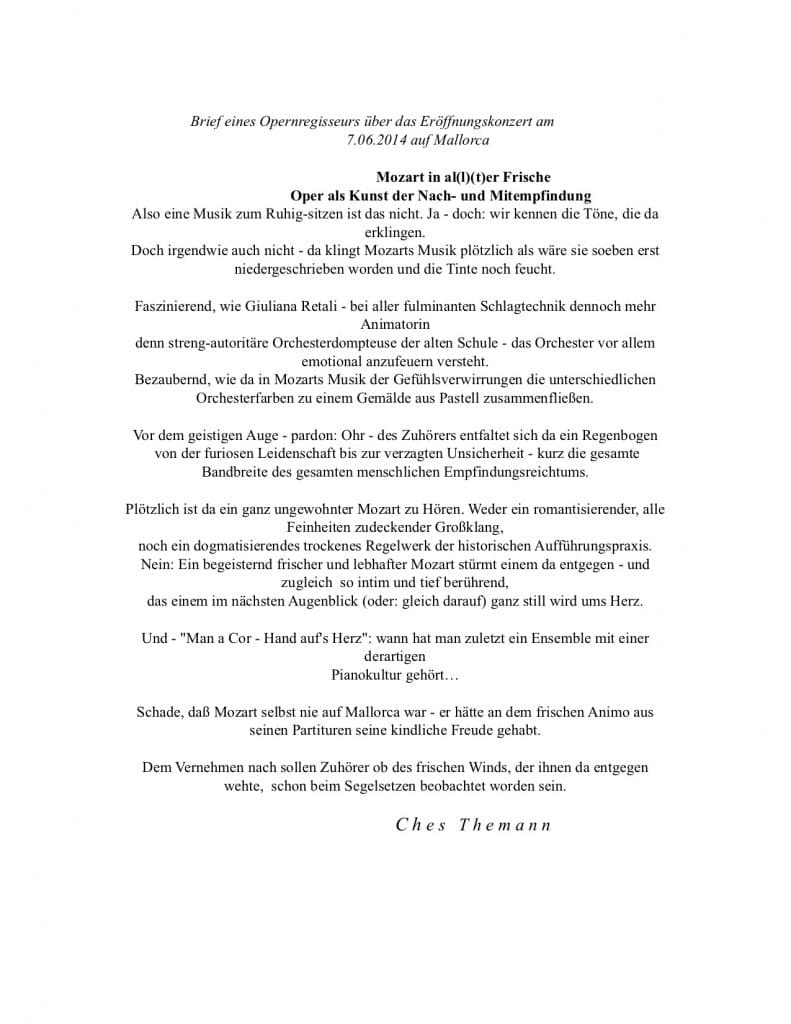